Crowdy Bay National Park
At Crowdy Bay National Park, we camped at the excellent Kylies Beach camping ground, which is nestled in littoral rainforest and only a minute walk from the beach. Fortunately, when I was there the number of people visiting the park was surprisingly low, especially considering the time of year (summer). It was very hot and humid, with most of NSW going through a heat wave. For example, it was 45 degrees in Tamworth.

As you can imagine we did a lot of swimming while staying at Crowdy Bay, and with some delight, both Little Tern and Crested Tern fished just outside the surf break. On the first day, I also wore my wet suit in the surf, attracting the attention of the local beach goers, including one who called me a ‘bloody Victorian’. I did not wear the wet suit again.

While there, l managed to catch up with some excellent birds. In the rainforest fringes, there were Regent Bowerbird, Pheasant Coucal, Cicadabird, Spangled Drongo, Common Koel, Black-faced Monarch, Scarlet Honeyeater, Eastern Whipbird, Australian Figbird and Red-backed Fairy-wren. While the drier areas of forest held plenty of White-cheeked Honeyeater White-throated Gerygone, Noisy Friarbird, Leaden Flycatcher, Scaly-breasted Lorikeet, and both Pied and Grey Butcherbird. High in the sky there were several large flocks of White-throated Needletail, and a smaller separate flock of Fork-tailed Swift, Along the coastline was the ubiquitous White-bellied Sea-eagle, as well as Peregrine Falcon, Intermediate and Eastern Reef Egret, Eastern Curlew and, as mentioned, terns such as Common, Little, Gull-billed, Caspian, Whiskered and Crested.

Apart from the birds, Crowdy Bay National Park has some fantastic heathland. This is a habitat known as ‘Wallum Sand Heath’. Banksia were in full flower, including Heath-leaved Banksia (Banksia ericifolia) and Coast Banksia (Banksia integrifolia), and there were some stunning examples of flowering Christmas Bell (Dendrobium lawesii). This heathland also holds several pairs of the rare Eastern Grass Owl.

Boorganna Nature Reserve
From Crowdy Bay, we headed inland to Boorganna Nature Reserve, a wonderful area of remnant rainforest. To get to Boorganna from Port Macquarie take the Oxley Highway through Wauchope and then turn into Comboyne Rd, then take Colling Rd and then Ducks Rd. I had particularly targeted Boorganna because of its manageable and compact size (390 ha), an easy place to see some rainforest birds. Established in 1904, Boorganna is one of the oldest nature reserves in the NSW. On the walk down to the Rawson Falls Lookout we encounter five types of forest – classed as sub-tropical rainforest, warm temperate rainforest, gully rainforest, dry rainforest, and wet and dry sclerophyll forest. As a result bird life was extremely interesting and diverse

In the fig trees next to the car park, there was a pair Spectacled Monarch, and in the rainforest edge, Green Catbird, Regent and Satin Bowerbird, Brown Cuckoo-Dove, Wompoo Fruit-Dove. Along the track on the way down there were Logrunner, Green Catbird, Regent and Satin Bowerbird, Russet-tailed Thrush (quite common), White-headed and Topknot Pigeon, Yellow-throated and Large-billed Scrubwren, Brown Gerygone, Crested Shrike-tit, Rufous Fantail, Eastern Whipbird, Lewin’s Honeyeater. On the drive up to Boorganna, and there were several large flocks of Bar-Shouldered Dove along the roadside, and several Pheasant Coucal.

Barrington Tops National Park
Next stop Barrington Tops National Park (one of the World Heritage CERRA regions) entering in to the Gloucester Tops section of the park, via the picturesque Gloucester Tops Rd. To get there, I accessed it via Buckketts Way near Forbesdale. Along the roadside on the way in there were Pheasant Coucal, Crimson and Eastern Rosella, Jacky Winter, Wedge-tailed Eagle and, perhaps surprisingly, White-breasted Sea-eagle,

At Gloucester Tops, we camped at the picturesque Gloucester River campground located where the river intersects with Sharps Creek. The birding around the campsite was superb: Glossy Black-Cockatoo and Azure Kingfisher feed along the creek, Bassian Thrush feed in the picnic ground, Green Catbird called from the trees nearby (listen for their load cat-like call), and there were Brown Cuckoo-Dove, Satin Bowerbird, Restless Flycatcher, Crested Shrike-tit, Shining Bronze-cuckoo and all three of the local Scrubwren – Yellow-throated, Large-billed and White-browed. In the mornings we were serenaded by a Superb Lyrebird, it called and displayed superbly right next to our tent!

From the Gloucester River campground, we drove up Gloucester Tops Rd to the tops themselves. It is located about 1250 meters above sea level, and here you will find a habitat mixed with sub-alpine woodland, cool temperate rainforest and areas of Antarctic Beech.

In the areas of Antarctic Beach (Nothofagus moorei) as along the Kerript Trail, there were Olive Whistler, Yellow-throated, Large-billed and White-browed Scrub-wren, Superb Lyrebird and Yellow-tailed Black Cockatoo.

The areas of Antarctic Beach in Gloucester Tops is regarded as one of the best places in Australia to see the very rare and localised Rufous Scrub-bird, one of two birds of the genus Atrichornis (the other being the Noisy Scrub-bird found in heathland in Western Australia southwest). During a number of walks along Kerript Trail, I heard Rufous Scrub-bird calling several time about 1 km up from the beginning of the track.

An extremely difficult bird to observe, the Rufous Scrub-bird male birds are good mimics. In the spring breeding season, they give out a very loud and penetrating series of between four and twelve sharp notes, which ends in a rapid staccato. At times, their call can be almost painful if you happen to be too close (something I discovered later at Lamington National Park).

Due to a nice selection of nocturnal and gliding mammals, Barrington Tops is a fantastic site for night birds. The following owls have all been recorded – Powerful, Masked, Sooty, Barking and Eastern Barn Owl. White-throated Nightjar and Owlet Nightjar also feed in the park.

The list of mammal’s ay Barrington Tops National Park is, to put it mildly, extensive – notably some of the threatened macropods (kangaroo and wallaby species) that prefer rainforests and wet eucalypt forests. Here is a list of some of the mammals in the par: Wombat, Koala, Spotted-tailed Quoll, Eastern Grey Kangaroo, Black, Red-necked and Long-nosed Potoroo, Red-legged and Red-necked Pademelon, Rufous Bettong, Northern Brown Bandicoot and Long-nosed Bandicoot, Brush-tailed and Ring-tailed Possum, Greater, Yellow-bellied (distinguished by its gurgling, laughter like call.) and Squirrel Glider, and the very rare Hastings River Mouse.

There is also a population of Parma Wallaby, a species long thought to be extinct in Australia, until its rediscovery in 1967. With an interesting history, just prior to their re-discovery, in Australia, a group of New Zealand conservation worker were trying to eradicate introduced Tammar Wallaby from a small island of the NZ coast (Kawau Is, near Auckland). To their astonishment, they discovered a miraculously surviving population of Parma Wallaby (which, at that time, was thought to be extinct in its native Australia). Also in summer, keep an eye open for reptiles such as Eastern Water Dragon (best seen along rocky creek and river lines), Southern Forest Dragon, Diamond python, and the very bright, yellowy-green, Common Tree Snake.

Copeland Tops Forest Reserve
Nearby at Copeland Tops Forest Reserve, there is a nice selection of pigeons, such as White-headed Pigeon, Wompoo and Topknot Pigeon, Brown Cuckoo-Dove, and Superb Fruit-Dove. Other interesting birds include Sooty Owl, Australian Logrunner, Noisy Pitta and Superb Lyrebird. Copeland Tops is the largest area of dry rainforest in the Gloucester district. Easily accessible, it contains a diverse variety of plants and animals including a large number of threatened species.

When in the NSW Mid Coast it is a must to visit Ash Island! There are some interesting mangrove/wetland species found here, such as Mangrove Gerygone and Tawny Grassbird, and island has become famous for the summer appearance of Eastern Yellow Wagtail, which are seen along the appropriately named Wagtail Way. They have occurred on Ash Island since 1993 – and the birds have been regular seen along Wagtail Way since 1998. Ash Island is also a great site for waders, looking for Greenshank, Ruff, Black-tailed Godwit, Pacific Golden Plover, Common Sandpiper, Eastern Curlew and Latham’s Snipe. There is also at least one resident pair of Eastern Grass Owl.

Hunter Wetland Centre (Newcastle)
Finally, while in Newcastle I stopped at the Hunter Wetland Centre. An interesting wetland, 213 bird species have been recorded at this diverse 40-hectare site. There was a nice selection of waterbirds such as Magpie Goose, Wandering Whistling-Duck, White-necked and White-faced Heron, Nankeen Night-Heron, Great, Little, Intermediate and Cattle Egret, Red-kneed Dotterel, and Royal Spoonbill, and the forest bordering the wetland is an evening roosting site for approximately 16,000 Australian White and Straw-necked Ibis. The Hunter Wetland Centre also hosts a Freckled Duck captive-breeding program. 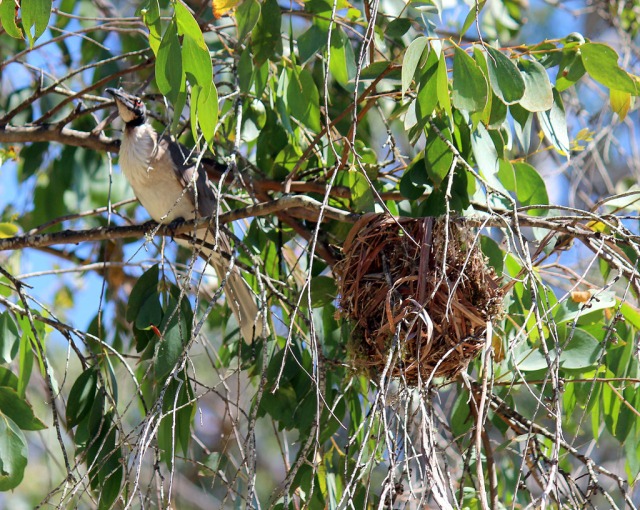 Birds such as White-cheeked Honeyeater and Spangled Drongo were common in the bushland along the walking trails, and a Peregrine Falcon hunted over the pool immediately in front of the main wetland centre. Other birds seen here include Dollarbird, Variegated Fairy-wren, Eastern Whipbird, Olive-backed Oriole, Brown Gerygone, Australian Reed-Warbler, Tawny and Little Grassbird, and raptors such as White-bellied Sea-Eagle and Grey Goshawk.

Summary
The NSW’s mid-north coast is fantastic birding area – and I cannot recommend it more highly. Interestingly when I visited Gloucester Tops in January 2004, I remember thinking to myself “I wonder if I will ever return this amazing place?” To my surprise by sheer coincidence I was there a couple of months later.